That's the hope if you're looking to dethrone what's become a poetry powerhouse on San Juan Island as our ferries haiku contest champion.

In the contest's first two go-arounds, both winners hailed from Friday Harbor. The first year, a faculty member at the town's high school won. Last year, a student from the same school was crowned champ.

So if you're looking to participate in a little friendly competition, hop on board one of our ferries and get your creative juices flowing because our popular haiku cover contest on Twitter is back! 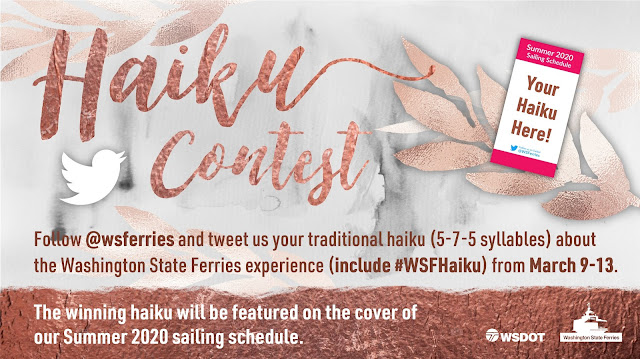 We're looking for a traditional haiku about the Washington State Ferries experience. The winning poem will be featured on the cover of our Summer 2020 Sailing Schedule!

How to enter
All you have to do is follow @wsferries on Twitter, then tweet your haiku between noon Monday, March 9, and noon Friday, March 13, 2020. Be sure to include the hashtag #WSFHaiku. All members of the public, except WSDOT employees and contractors, are eligible and invited to participate. No fare purchase is required.

Haiku requirements and contest rules
In addition to the submission qualifications listed above, each entrant must follow these requirements and rules:
Selecting a winner
A panel of judges from WSF will select up to 25 entries based on relevance to the WSF experience. Those submissions will be sent to Washington State Poet Laureate Claudia Castro Luna and local haiku poet Michael Dylan Welch, who will each choose two finalists based on creativity, originality, content and writing. Decisions of the judges are subjective, final, and cannot be appealed.

For those who want to sharpen their haiku skills, contest judge Michael Dylan Welch recommends reading his "Becoming a Haiku Poet" webpage.

The four finalists' poems will be posted on the @wsferries Twitter page at noon Monday, March 23. The haiku with the most likes at noon Friday, March 27, will be named the winner.

We will then work with the winner to find a photo to serve as a background for their haiku. The work of art will be featured on our 2020 summer schedules!
Posted by Ryan Lanier at Friday, February 28, 2020

Because we are holding this contest as a way to increase awareness of our Twitter account – which provides real-time updates about ferry service – we are unfortunately only accepting submissions via Twitter.

So, the WSF is NOT going to consider an alternate method to TWITTER? The WSF decision makers are blocking a large number of people from participating with this decision! Many many seniors are tired of being forced to sign up for another "social Media" program that can be hacked and have MORE of their personal information stolen and used to defraud them.