Spokane message boards get "lit" for the holiday season

The holiday season is upon us. Kids are on winter break. Travelers are heading over the river and through the woods to grandmother's house. It is a very busy time of year. One that involves celebration, family and friends. And as always, we want you to be safe on the roads.

If you have driven through Spokane recently, you may have noticed more messages on the reader boards that sit over Interstate 90, US 2, US 395 and US 195. We're trying a pilot program to do more safety messages to get drivers attention and remind them of safe driving habits. Previously we used these types of messages for several years on a system of portable message boards on State Route 26 and US 195 near Pullman. 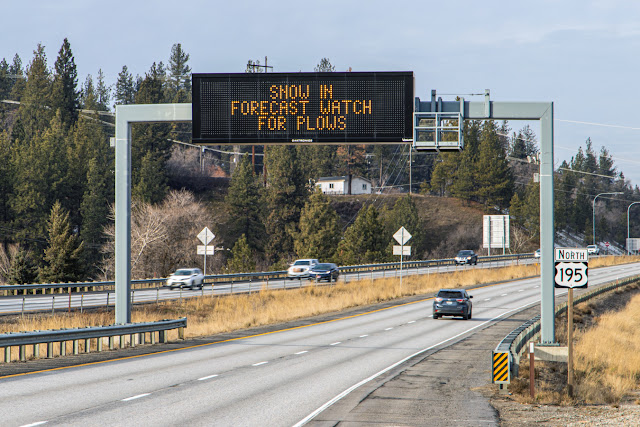 There had been several serious or fatal collisions on the routes we're testing messages on. About 17 percent were related to distracted driving, 7 percent being right-of-way or unsafe passing, another 7 percent were sleeping behind the wheel. The rest were related to animal strikes. In 2016 we collaborated with Washington State University and the Washington State Patrol on the #BeSafeCougs campaign to help highway safety messages reach WSU students/staff/families.

Our part of the campaign involves safety messages on the portable message boards when students begin school in August then again around Thanksgiving and Apple Cup, winter break, spring break and the end of the school year. These dates were chosen as times of high volume of traffic coming to and leaving the university.

At first messages were simple – "Don't text and drive" or "Tired? Take a break". Since then messages have evolved to become relatable and personable to students such as "Santa is watching, put down the phone" or "Who you going to call? No one you're driving!" The most popular message this year has been "Ralphie put down phone, you'll txt your eye out!"

By using more creative and relatable messaging we are reaching a larger audience and able to cut through the white noise of typical messaging and get people talking about it. We also try to keep the number of days they are up limited to keep them fresh and noticeable.

Moving from portable signs to permanent

With about 127,000 vehicles moving through Spokane daily, there is opportunity to reach a large audience. In years past the message boards have been reserved for Amber Alerts, blocking collisions and the occasional emphasis patrol. We saw an opportunity to use them to promote safe driving habits, especially around the holidays.

The first message ran on November 26 ahead of Thanksgiving reading "Feast your eyes on the road, not your phone".

For the past week the messages are part of a DUI emphasis patrol that Washington State Patrol is doing. The messages have included "You're not Rudolph, don't drive lit!" and "Don't drive Blitzen, use a sober driver!" Both messages encourage people not to drink and drive this holiday season. We will continue to put up new messages through January 2.

Starting January 9, students heading back to WSU will also get a fresh set of messages displayed.

Who creates the messages?

We have a team that comes up with the messages that includes people from our traffic office, maintenance, communications and staff from the Spokane Regional Transportation Management Center. We generally meet once a month or two weeks prior to any of the higher-volume traffic events that would involve WSU. We brainstorm ideas and talk about each one, picking usually between 6-8 messages to put on the portable boards. In these meetings we also discuss when, where and how long to place messages around the Spokane region on the permanent message boards.

Can we expect more fun messages?

Absolutely! In the coming months there will be more messages that will go up on the permanent message boards. We also have a partnership with weather forecasters to bring warnings about heavy forecasted snow. There will also be other emphasis patrols by Washington State Patrol that will offer more opportunity to be creative in our messaging. Finally, we will use other holidays to promote safe driving behavior.

While these messages can be fun, at the end of the day they have a purpose and an action for drivers to take so we can all get home to our friends and family safely.
Posted by WSDOT at Monday, December 23, 2019