What we accomplished in 2019

With less than two weeks left before 2020, most of our Snohomish County construction work for the year is complete. We want to end the year with a big “Thank you!” to travelers who took the time to stay engaged, planned ahead during closures and made adjustments to help us make safety improvements and complete preservation work. These projects reduce the risk of costly emergency repairs that add time to already long commutes.

Here’s a look at a few of the accomplishments on state highways in Snohomish County that happened in 2019.


US 2/Bickford to Gold Bar 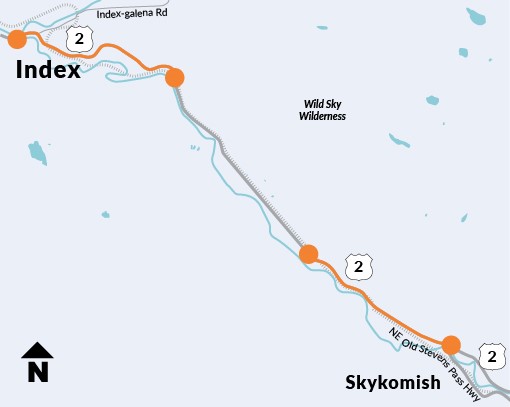 Starting in spring 2020, we will spend more than $2 million rehabilitating 19 bridge decks between Index and Skykomish. The asphalt on many of these bridges have exceeded their lifespan of 15 years. Further west on US 2, a $3.1 million safety improvement project will add physical barriers between the eastbound and westbound lanes between Bickford Avenue and the SR 9 interchange.

We will continue to deliver projects that keep Washingtonians moving, and hope you remain resolved to staying informed, engaged and committed to sharing important project information with friends, family and co-workers when it comes to critical work happening our highways.
Posted by WSDOT at Wednesday, December 18, 2019

How can you say this, when your boss has ignored the will of the people, and froze all work. This is a travesty for you to post!

I really appreciate the widening of US 2 between Everett and Snohomish. Driving at night in the rain is much less unpleasant with the separation between the lanes.

RD Pierce, it’s important to clarify that all of this work talked about in this blog has already been completed. After 976 passed, Gov. Inslee’s direction to WSDOT was to postpone projects not yet underway. Projects that added capacity like highway expansion were paused because the work was going out to advertisement within the next six months for contractor bids. Projects were not selected by what county they were in or how they were funded – gas tax or otherwise. Many mobility projects remain under construction and the projects that are paused are just that – a pause to allow the governor and Legislature to make longer-term choices about how to implement 976 and amend our current transportation budget during the legislative session. The passage of I-976 did not make changes to the 2019-21 transportation budget. Instead, it changed laws regarding certain taxes and fees which results in less revenue available to pay for that budget and others in the future. Our most recent 2019-21 budget was enacted by the Legislature and signed into law by the Governor this past spring and covers the two year period that began July 2019 and runs through June 2021.

Unknown, we are scheduled to begin construction in 2021 on adding a fourth lane on northbound I-5 between Marine View Drive in Everett and SR 529 in Marysville. This fourth lane will be designated as HOV. WSDOT selected the HOV lane alternative after seeking guidance and feedback from area cities and agencies on managing the congestion that regularly occurs due to the explosive growth experienced in Snohomish County. Our studies found that a high percentage of HOV-eligible vehicles regularly travel through this area. The project, which is scheduled for completion in 2022, will also improve the SR 529 interchange in Marysville. You can learn more on our project website: www.wsdot.wa.gov/projects/i5/marine-view-sr-528/home

This summer, we met with community members and leaders who live and work along US 2 between Sultan and Monroe. While there are no current plans for increasing highway capacity, the state legislature recently allocated $17 million for safety improvements on the US 2 corridor between Everett and Stevens Pass. We are currently in the process of reviewing multiple highway improvement proposals to determine which ones present the best tangible, practical solutions for improving safety on US 2. Our goal remains to provide Washington travelers with a safe, sustainable and integrated multimodal system by implementing reliable and cost-effective transportation options.

When are you going to widen SR522 between Paradise Lake Road and the River. Its a huge line of cars for 2 to 3 hours per day each way. Then when will Echo Lake Road be connected through using 212th, currently Echo Lake Road is a one way in and one way out. We need you guys to make some improvements out here!!!, Thanks for the help.

In 2018, WSDOT identified a preliminary preferred alternative to improve the Paradise Lake Road intersection. Although we have received funding for design and right of way acquisition for the interchange and completing the widening, there is no timeline for actual construction because we don’t have funding from the Legislature yet for that portion of the work. You can read more about the widening plans on our project website: www.wsdot.wa.gov/Projects/SR522/Widen/Paradise_SnoRiver/default.htm.

These long term plans also call for completing the SR 522/Echo Lake Road interchange. However, Echo Lake Road is a Snohomish County road so any additional improvements near 212th would need to be completed by the county.