With population and job growth booming across the Seattle metropolitan area, drivers want to know why we're reducing the number of lanes on State Route 520 between Seattle and the Eastside. Some folks say the state should add lanes on SR 520, not take them away!

The fact is...we're doing both.

Keeping traffic moving during construction
We've long planned SR 520's six-lanes-to-four constriction between Seattle and the new floating bridge. It's part of the highway's ongoing reconstruction from I-405 to I-5. A key element of this megaproject is the replacement of the highway's aging, structurally vulnerable bridges.

To keep traffic moving along this critical urban freeway, we're doing the work in stages. First, we replaced the old four-lane floating bridge with a six-lane bridge across most of Lake Washington. A year later, in 2017, we finished a three-lane bridge that connects the westbound lanes from the floating bridge across Union Bay to Montlake.
And now, changing directions, we're preparing to remove and replace the original, 1960s-era SR 520 bridge over Union Bay. (We restriped this older bridge two years ago to temporarily carry three lanes of eastbound-only traffic).

Why the lane reduction?
That old bridge between Montlake and the new floating bridge was built as a single structure, with two lanes in each direction. Supported by hollow, concrete columns, it could fail in a severe earthquake. The replacement for this 1.2-mile-long span will be two side-by-side, three-lane bridges on stronger columns.

We're removing and replacing the old bridge with a newer, eastbound span within the same general footprint. But to do that, we have to shift all eastbound SR 520 traffic during the interim onto the existing westbound bridge, which we're restriping to carry two lanes in each direction. Weather permitting, we'll do that work during this weekend's eastbound closure of the highway, and complete the lane shift by Monday morning, Nov. 11.

Afterward, there will be two-way, two-lane traffic over Union Bay for the next three to four years as we build a seismically stronger, three-lane bridge for eastbound-only traffic. This graphic shows how the lane shift and interim highway realignment will work. 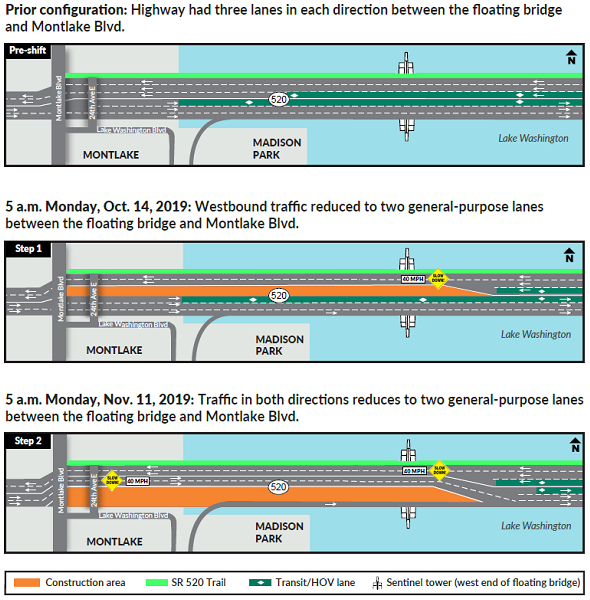 Come Monday morning, Nov. 11, drivers crossing Lake Washington on SR 520 basically will encounter the same highway configuration they saw three years ago: three lanes in both directions from I-405 to the west end of the floating bridge, and then two lanes in each direction from the floating bridge to I-5.

Expect longer commutes during construction
Understand that this traffic shift will cause some travel delays. With the HOV lanes temporarily gone between Montlake and the floating bridge, peak-period commutes will be a bit longer. And because the reduced lanes move through a construction zone, we've lowered the speed limit to 40 mph. We encourage people to follow the new limit – for their own safety and that of our construction crews.

One way to avoid the heaviest congestion is to alter your schedule, if possible. Leave home a bit earlier or a bit later than normal, and do the same for the return home. Try to miss the traditional peak commuting times – roughly 7:30 to 9 a.m., and 4:30 to 6 p.m.

Another option is to ride the bus or a three-person-plus carpool. The HOV lanes remain open on the floating bridge, and they'll save a little time if westbound traffic is backed up coming into Seattle.

And don't forget. There's a 14-foot-wide bike and pedestrian path that crosses the lake. It's virtually congestion-free – and there's no toll.
Posted by WSDOT at Wednesday, November 06, 2019

Screwing commuters once again. Fantastic job - we spent hundreds of millions on a new 520 bridge, toll the crap out of drivers, then close the extra lanes less than three years later. How was the idiot that decided this was ok? Clearly not someone who drives on the 520 bridge on a regular basis. Oh yeah - you closed the hov lane 2.4 miles from I-5 so truck drivers could get on the eastbound lane. For their convenience, you screwed everyone else. Nice job.

How would you have done things differently?

Hahaha. So true. The commuters who form the backbone of our area and fund everything will get screwed. We won't get to see our families for bedtime. Great for family values. Thanks WDOT!!!! Thanks Governor. You guys will pay for this at the ballot box. I will never ever ever ever support you guys again and I have in the past.

Why not build a new bridge alongside the existing one, open that, then remove the existing bridge? Just like was done with the 520 floating bridge replacement. This would be much more friendly to drivers.

Traffic heading west in the mornings often backs up past Bellevue Way adding about 20-30 minutes to my journey. I drive my daughter to school each morning and pickup in the afternoon. I cross the bridge 4 times a day. The cost is horrific ($2,000 p.a.), but the time added to my day in the car is even worse. The thought of doing this for four years depresses me.

What can be done at this point to smooth/speed up traffic through the construction zone? My 12 mile commute Seattle to Bellevue has increased to on average 60 minutes during rush hour. That means my average speed is just 12 miles per hour.
Thanks