Final connections ahead SR 16 and southbound I-5 in Tacoma

Update 8/19/19
The traffic shift has been completed.

Updated: 8/12/19 8:00 a.m
The overnight traffic shift for southbound Interstate 5 at State Route 16 in Tacoma was postponed late Saturday, Aug. 10 due to rain and a collision in the work zone. Skanska is now planning for this traffic shift to occur during the overnight hours of Saturday, Aug. 17. Once complete, Skanska will open new ramps to all traffic, bringing congestion relief and changes to the South 38th Street interchange.


Original post
This August, new highway connections at the Interstate 5 and State Route 16 interchange in Tacoma will open. This means an end to the multi-year, three-project effort to rebuild and widen the SR 16 Nalley Valley Viaduct is near.

Weather permitting, during the overnight hours of Saturday, August 10, contractor Skanska will shift all southbound I-5 lanes to its new permanent alignment, reopen two popular ramps and shift eastbound SR 16 traffic going to southbound I-5 between Union Avenue and Sprague Avenue back to its original configuration.


While many eastbound SR 16 drivers will rejoice at not having to merge left at Union Avenue to reach southbound I-5, there are some key improvements that will require drivers to reprogram into memory.

When these ramps re-open and eastbound SR 16 traffic is shifted back to its original lanes, the following permanent improvements will be in place:
New ramp choices 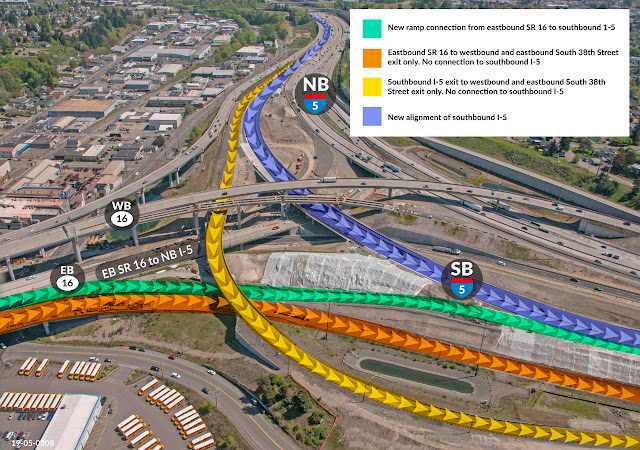 Southbound I-5 on new alignment

In addition to new ramp connections opening, all lanes of southbound I-5 will move on to a new final alignment across a brand new bridge. Currently there is one lane of traffic going across this new bridge. In the days and nights leading up to the August 10 traffic shift, the contractor will be removing 8,000 feet of temporary barrier and replacing it with temporary orange construction barrels. Drivers may also see crews installing the final lane striping in the work zone behind the orange construction barrels.

Once all lanes of southbound I-5 are moved to this final alignment, the contractor will begin removing temporary striping and barrier along lanes of northbound I-5 from approximately 48th Street to M Street to the permanent configuration of 12-foot lane widths and wider shoulders.

Finish line is near

The I-5 – SR 16 Realignment – HOV Structure and Connections project began in February 2017. Over the past 29 months, Skanska and their design firm WSP USA have completed design work and moved travel lanes from one side of the highway to another, built four new bridges, installed 83 new girders project-wide and moved thousands of cubic yards of soil, all while keeping traffic moving.

In the last few weeks of construction, Skanska will finish the HOV connections between SR 16 and I-5. We will provide more information on that in the coming weeks. Throughout these changes, please continue to watch your speed in work zones and give construction crews the room they need to finish this project.
Posted by WSDOT at Monday, August 05, 2019

Email ThisBlogThis!Share to TwitterShare to FacebookShare to Pinterest
Labels: highway construction, I-5, I-5 Tacoma, sr 16