Crews continue to resurface four highways in three counties, but the next phase of the project will bring with it delays of up to 45 minutes.

Daytime lane closures
Contractor crews from Doolittle Construction continue their nighttime and daytime lane closures. Work hours vary depending on the highway, but the majority is happening on weekdays or weeknights, with flaggers and/or a pilot car alternating traffic through a single open lane of highway. Travelers need to continue to factor in extra time into their trips.

Stages of work
During the first phases of resurfacing work that happened in the spring and early summer, crews sealed cracks, repaired damaged pavement, dug out pot holes and filled wheel ruts. I've been documenting their progress on the @WSDOT_North twitter account using #WABST2019. Drivers reported delays hovering around 15-20 minutes during these early phases.

The second stage will begin in late July and early August, depending on the highway and weather. Crews need dry conditions and hotter temperatures to place a mixture of oil, sand and gravel on the road to form the new asphalt. Then, and here's where the extended wait times come in, they must allow the new surface to properly adhere to the road surface and dry before reopening lanes to traffic.

Travelers should allow an extra 45 minutes in travel time during this second stage of work in the following locations: 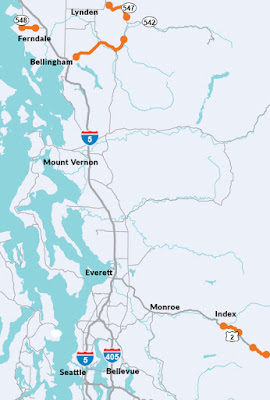 Weather conditions could cancel work in one area and push crews to another area instead. When possible, changes will be posted on the WSDOT North Twitter account.
Posted by WSDOT at Wednesday, July 24, 2019