The level of community engagement with this change has been outstanding, and we thank each and every one of you for taking the time to educate yourselves and spark conversation with fellow commuters regarding what improvements are/can be made along this corridor.

Opportunity for improvement
As mentioned in the blog, most of the collisions are rear-end or side-swipe in nature. The bulk of these collisions happen before or after a peak commute, as the mainline (20th Street) starts to open up. When drivers are traveling well above the posted speed limit of 35 mph on 20th, it is virtually impossible to safely merge from SR 204. That is why we are taking the opportunity presented with the westbound US 2 closure to make small improvements to remind drivers of current merging expectations.

Yield signs
Many of your comments are about the yield signs on SR 204. Yes, they will remain. As for moving the “freeway entrance” sign from up on 20th Street to past the merge with SR 204, we need downhill drivers to do their diligence and maintain the reduced speed to better match speeds from SR 204. This enables SR 204 drivers to find gaps and merge safely.

Who merges?
During traffic congestion, travelers naturally merge together as this is safe and courteous. SR 204 drivers are still required to yield to 20th St. drivers when necessary; especially outside of congested periods when traffic is more free flowing.

Investing in US 2
US 2 is one of the few year-round highways across Washington’s Cascade Mountain range, making it vitally important to the state’s entire transportation picture. From 2008-2017, WSDOT invested nearly $60 million in improvements on US 2 between Everett and the Stevens Pass summit. Projects included adding roundabouts, dedicated turn lanes, traffic cameras, new pavement, electronic message and warning signs, rumble strips and reduced speed limits. More improvement projects are on track to break ground along the corridor within the next 5 years.

For years, the westbound merge of State Route 204 and 20th Street Southeast between Lake Stevens and Snohomish has been a trouble spot.

Almost every reported collision is rear-end or side-swipe. Many times, downhill traffic on 20th Street is picking up speed as drivers on the westbound SR 204 ramp are slowing down to make the curve.

We’re taking steps this summer to change that.

A few months ago, our employee Shane Oden came up with a practical solution to noticeably improve safety at the merge. “More and more I have been hearing residents around the neighboring communities voice concern and frustration with this merge,” he said.

The majority of travelers agreed they need to all share the road, so Oden went to work on making it easier to do so. Rather than a new construction project, Oden developed modifications to the existing merge point that “are meant to remind and encourage motorists to slow down and stay alert,” he said.

So, when westbound US 2 is closed for a weekend this summer for the Hewitt Avenue trestle repaving and rehabilitation project, our maintenance crews also will use the existing closure to make the following changes: 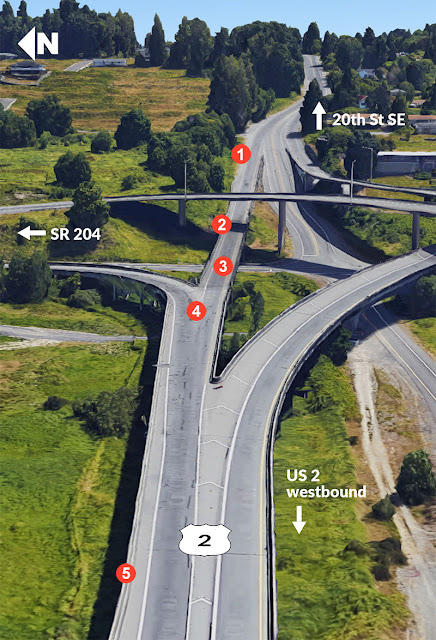 These simple changes are a smart use of time and money to influence driver behavior, slow down traffic and cultivate a safer environment for merging onto a highway that serves roughly 22,000 drivers every day. They can also be implemented easier and more quickly than a more elaborate construction project, meaning travelers will see benefits sooner.

Bottom line, when we work together to share the road, we reduce the number of backups that can make an already long commute longer.
Posted by WSDOT at Thursday, July 18, 2019

It may work for a while, but soon after, it’ll all go back to the same old way. We can spend hundreds of millions for other projects, but let the state forget about Hwy 2 - THE TRESTLE. The vehicles entering from 204 will still be a big problem in regards to merging, most of the drivers disregard the merge sign and the flashing lights, anyway. My years spent on Lake Stevens Fire can attest to that.

The only way to fix this issue, in all seriousness, is to add 2 more lanes Westbound!

GAH!!! Zipper merge signs! More than 1. Big and bold. We already know how to do it, and that it is necessary to make taffic smooth. Now we need to make it REQUIRED!!

Are they going to do away with the yield sign from 204? Is this intended to be a zipper merge situation? Making this change will help with sideswipes, if people actually maintain their speed coming down the hill, but as soon as you get a couple of people tailgaiting down 20th st, people on 204 will still have to stop, creating possibly even more read-end situations.

So the yield for 204 means nothing? Got it. This isn't "smart", it's reckless. But that is the WSDOT way after all.

None of this will do a single thing to solve the problem. There is too much volume!! People pickup speed because they’re coming down a steep incline, not because they’re accelerating to highway speed on 20th. This. Will. Not. Work.

you can't have people flying 50 mph off of 20th then have 204 trying to merge in at 30 mph. traffic on 20th can see cars from 204 coming and speed up and bumper hump the guy in front leaving no space for a merge coming from 204. changing signs doesn't change driving habits.

They need the yield sign to be given to the people coming down the hill- not around that corner. They also need a large speed bump to slow people down coming down that hill. People come down that hill at 50 or greater and then get mad because you are trying to get on. The whole thing is a mess and the state hasn’t made any significant improvements to get on the trestle east or west bound in the 20 years I’ve lived out here. I really don’t know where our tax dollars go..

A workable temporary fix would be to extend and widen the 204 lane another 500 feet or so and have zipper merge signs on both lanes.

Getting on at 204 is often harrowing for me. My car sits low, and seeing cars coming down 20th at 55 is near impossible over the guard rail. Slowing 20th traffic is a welcome change, as sometimes properly yielding to traffic sometimes resembles a drag race, from stopped at the yield sign to 50 mph just a couple hundred feet later. Even if it isn't perfect, I'm happy for a solution since the way it is currently sucks.

Apparently WSDOT doesn't even know that from 204 it is a YIELD not a MERGE. Has always been a YIELD. Calling it a merge when it is a Yield is part of the problem. I have zero confidence in this new plan.

Do they realize that the white lines don't mean much to most drivers? Everyday people from 20th/204 move into the southern most lane and cut off the traffic heading westbound on Hwy 2, forcing them to slow down quickly to avoid a collision. Additionally, coming down 20th in the winter is sketchy when icy, so doing something to slow them down is going to lead to more folks in the ditch. I highly doubt this will do much at all. I wish they'd look at solving the problem, not putting an ineffective bandaid on it.

I wonder this too. The yield sign going from 204 onto 2 W seems misplaced, and the cars coming from that side don't tend to yield in my experience. Clarity over the expectation of who and how to merge would be helpful there.

We live in an "all about me" society. If those commenters from 20th street could just get everyone else off of their road, there would be no problem! Yuk, Yuk. Actually, the new homes going into Lake Stevens at several hundred per year may need to pitch in for new roads & alternate routes across the valley. Maybe they can install more transit stops for those new neighborhoods. Or go back to California.

The signs on the onramp from 204 do say, "YIELD" to the traffic coming down 20th. But the drivers on 204 realized, If everyone obeyed this and yielded to the faster traffic coming down the hill, then the traffic on 204 would back up all the way to HWY 9 as drivers would have to basically come to a stop, while straining their necks back to see if it was safe to procede,. It is a horrible design and does need to be changed. But for the time being, this change is a good safety improvement. With the increasing droves of traffic coming to the trestle , having both lanes "MERGE" at the same speed, keeps both streets moving and will greatly reduce rear/ side collisions here. Obviously, because of the steep grade on 20th, gravity alone will increase vehicle speed, so they will have to brake more as they descend down to the merging speed.
The traffic circles were a big inconvenience when they first appeared. Now traffic flows much better and accidents have been reduced because we all have to slow down at these intersections. Things flow so much better when everyone just takes their turn.

204 is a yield, not a merge. As you should always yield to downhill traffic. Isn’t that the law? This will be a waste of tax payer dollars as it will not fix anything. The whole westbound trestle needs a complete overhaul adding at the very least 1 more lane.

They need a bigger yield sign with flashing lights for the traffic from 204. Especially for the tandum gravel trucks.

What they need is a BIGGER yield sign with flashing lights for the traffic from 204. Or hey, why not a roundabout, don't they fix everything?

What is needed is another east west route from highway 9 and 2 interchange to I-5 / Boeing freeway.

You want to add a speed bump? Let's make it a speed hump (bigger speed bump)
Then we can launch on top of the idiots that fail to merge.

Dear DOT: please make this simple change. Drivers on 20th need to yeild to traffic on 204. This is a huge safety concern coming down 204 and then turning head almost backwards to look for traffic on 20th while making that sweeping corner to highway 2.... Then slamming on brakes immediately because 2 is at a dead stop. Have traffic on 20th yeild to 204 since 20th traffic has far better and safer view of 204 and highway 2.

Send a couple of your engineers to Phoenix for advise. They nail any problems from the git go.

We have made an update to the blog to address your concerns.

Stupid solution. Why don’t you put in metered lights at 204 AND 20th? Just making the obvious MORE obvious won’t change a thing.

As a motorcycle rider, I sure hope that the creator of this plan has studied the effects of rumble strips, while trying to brake to maintain a posted speed limit, in our Northwest damp conditions, while being tailgated by larger vehicles, while going downhill.... I sure hope that the combination of all of these conditions with the added element of rumble strips on the road, does not lead to a fatality.

Metered lights are only activated during peak hours. In the case of SR 204 & 20th Street Southeast, the meter would only be on for a couple of hours in the morning. At this location, our studies show morning congestion naturally slows drivers down and they merge more successfully. The issue is after the morning rush when traffic is more free-flowing on 20th. That’s when we see speeds increase dramatically, and there are more rear-end and side-swipe collisions. Our changes will remind drivers to slow down to better match the speeds of drivers yielding from SR 204. Slower speeds will create safer merge conditions.