Imagine a world in which Spokane has finished the North Spokane Corridor (NSC). Can you picture it? For those that have lived in Spokane awhile, it’s hard to imagine. Picture a puzzle that's halfway done but you are missing one piece to complete the outer edge. After spending countless hours looking for it, you finally find the piece on the floor! Connecting that one piece of the puzzle now sends you in a frenzy and you finish within just a few minutes.

The NSC is like that puzzle. The first 5½ miles are the nearly-completed outer portion. Then we waited for that one missing piece to complete the outer edge. And now the waiting game is over. The piece has been placed and the flurry of activity is about to pick up.

Last week in our series we touched on the history of the NSC. This week we look at current progress, the puzzle piece project that will open the flood gates for construction and how you can get involved in placemaking of the Children of the Sun Trail.

Current projects
For the past couple years construction slowed due to limited funding. In 2014, the Francis Avenue Bridge was completed over the Burlington Northern Santa Fe (BNSF) railroad and future NSC. Then the first BNSF rail realignment came in 2015, a new roundabout at the Freya and Wellesley intersection in 2016 and Oxarc site cleanup in 2017. A grading project kicked off in 2018 along with new bridges over Freya, which continues this year. This project was funded with money remaining from favorable bids.

The Legislature provided funding for the remaining portion of the NSC, including the connection to I-90, through the Connecting Washington funding package passed in 2015. In 2018 the first Connecting Washington project provided for grading and an asphalt base layer on a new segment of road from Freya down to Columbia Street. This project is continuing, with concrete paving that started just a few weeks ago.

As of today, that is the only active Connecting Washington project on the NSC. But things are about to change.

Placing the puzzle piece
Remember that puzzle? The missing piece is the 2nd BNSF Railroad Realignment project, which will make room for the NSC. Moving the BNSF railroad track will allow the NSC to be built in its place. This is the first large funding expenditure allocated by the Connecting Washington package and the project is no easy task.

Two new rail bridges will be built over Wellesley Avenue. In some places the track will move almost 120 feet closer to Market Street to the west. Once the NSC is built, the current spur line - a secondary railway line -  will be severed and replaced with a northern entry to a second spur line on the east side of the NSC. While that is happening, there will be a lot of earth moving – about 565,000 cubic yards! – to get ready for the new Wellesley interchange improvements with the NSC.

To put this in perspective, it takes about 3,000 cubic yards to fill an Olympic-sized swimming pool, so this project will move roughly 190 pools of earth. When construction begins in a few months, there will be no central east-west crossing from Market to Freya for about three years. Drivers will travel north to Francis or south to Euclid to cross where the future NSC will be.

These charrettes are an opportunity to identify relevant issues and find potential solutions within the project that has community-wide significance. The meetings will be:
Just like the first 5½ miles of the NSC, the Children of the Sun Trail is also complete along the same stretch. And with the second BNSF Realignment puzzle piece being placed, the flood gates of projects are about to open. In next week’s blog we look ahead to the timing and projects that will complete the NSC to I-90. 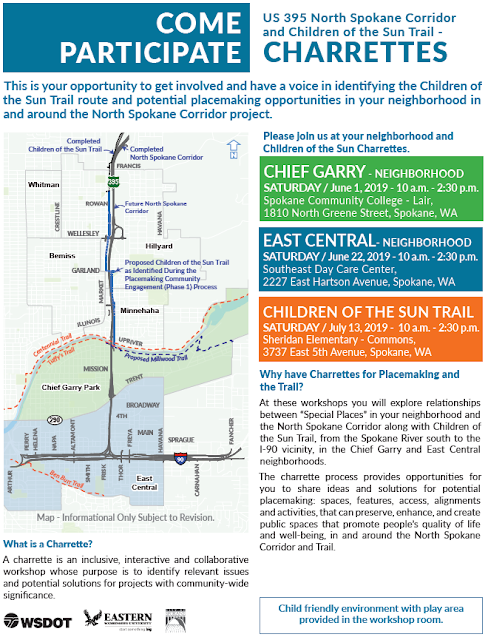 Great blog series thus far. Looking forward for next week's.
Thanks for the detailed information and photos!

How about the same blog set for the I5 Tacoma project.

I love these updates. I don't live in Spokane but this is a great and necessary project long in the making.