The fighter jets that take off from Naval Air Station Whidbey Island are no strangers to performing different maneuvers. On Sunday, June 23, people traveling past the air base on State Route 20 near Oak Harbor had to perform a different maneuver of their own: Navigating a new roundabout.


A time lapse camera captured crews building the roundabout at SR 20
and Banta Road from Thursday, June 6 to Sunday, June 23

Working at the speed of sound
When contractor crews with SRV Construction began excavating the highway at the Banta Road/Northgate Drive intersection on Thursday, June 6, the goal was to open the roundabout by July 4. After working 20 hours a day, six days a week at what seemed like Mach 1 speed, the roundabout opened to traffic on Sunday, June 23, 10 days ahead of schedule.

Highway to the safety zone
So why build this roundabout in the first place? In a word, safety.

Since 2011, law enforcement responded to 26 crashes that injured 11 people at the SR 20 and Banta/Northgate intersection. Half of those collisions involved vehicles trying to turn onto the highway from side roads. Roundabouts have a proven history of reducing injury and deadly crashes by more than 75 percent.

The roundabout also provides a new U-turn option for people located north and south of Banta/Northgate, which could reduce left turns onto the highway and the chance of broadside “T-bone” collisions.

More fly-bys to come
Even though the roundabout is open to traffic, crews still have some work to finish, like sealing the new asphalt, adding fresh striping and landscaping, before they fly off for good. While this work doesn't involve the same around-the-clock lane closures travelers have grown accustomed to the past couple of weeks, people should prepare for the occasional closure. All work associated with this project is expected to wrap up in the fall.

Avoid the last-second scramble by checking these resources ahead of time for alerts of upcoming road work:
Thanks for being our wingman
Just like performing a barrel roll takes timing and coordination, so did completing this project. A stretch of spectacular weather and several different crews harmoniously working alongside one another led to finishing the roundabout early.

It also took the patience of those traveling through the work zone. Although there have been traffic delays, the crews appreciated every wave and kind word they received from travelers during construction. Don't lose that loving feeling! 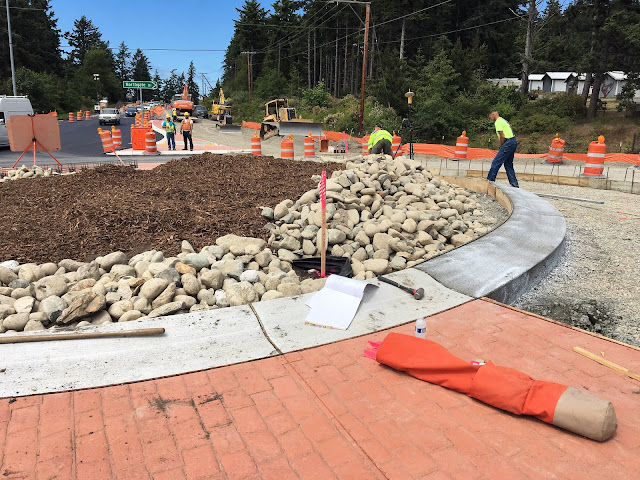 For more pictures from this project, check out our Flickr album

Roundabout 101
Navigating a roundabout can feel like flying aerobatics if you don't know how to do it. Sure, there is a learning curve just like with any traffic revision. Just follow these simple tips:
More of a visual learner? We have a five-part video series about roundabout etiquette that may help.