Springtime is often associated with change, and a big change is on the horizon for folks who travel on northbound I-5 in south Skagit County.

Starting Sunday, May 5, contractor crews with our concrete rehabilitation project between Conway and Arlington will begin five straight days of lane closures and traffic reconfigurations. No need to panic, though...it's only temporary. And navigating your way through the construction zone will be easier than you think.

Hard five days of work
Since this project began last summer, crews mostly worked overnight to replace hundreds of damaged concrete panels and grind down thousands more. The goal: to preserve the highway and create a smoother driving surface for the 85,000 vehicles that use it every day.

Now, they will close two out of three lanes of northbound I-5 at Starbird Road from 7 p.m. Sunday, May 5 to noon on Friday, May 10. These five days of around-the-clock work will give crews the time and space to replace 200 of those cracked and rut-riddled concrete panels. That's almost enough to cover an entire football field.

Hundreds of concrete panels on I-5 between Conway and Arlington are riddled with cracks and ruts like these, and are in the process of being replaced.

The shift is on
To keep traffic moving, we devised a way to get two lanes of traffic past the work zone, rather than just one. On Sunday night, crews will temporarily restripe northbound I-5 so what is normally the middle lane will shift to the right, and what is normally the far right lane will shift vehicles to the Starbird Road exit. Motorists will then rejoin northbound I-5 using the Starbird Road on-ramp.

The arrows show how crews will keep two lanes of traffic moving during the two-lane closure.

This shift will make getting around more complicated for locals. In order to keep the highway traffic continuously flowing, we will close the Starbird Road overpass to traffic. The maps below show some of the alternate ways people can get to I-5. 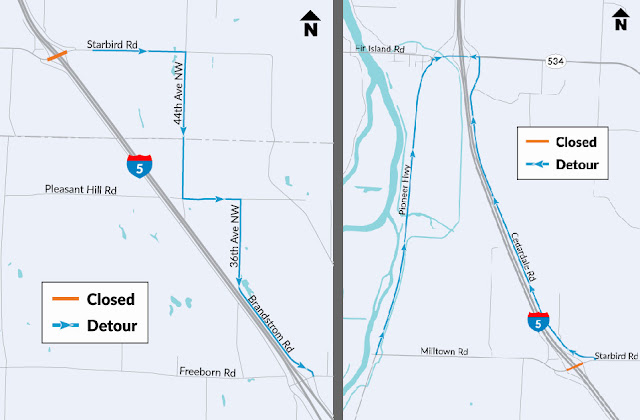 Folks living west of I-5 can still access southbound I-5 at Starbird Road, but will need to use a detour for northbound.

Even with this temporary striping and traffic shifts, we expect up to three-mile backups on northbound I-5 during peak travel periods, especially in the late afternoons. Travelers will likely encounter the biggest backups on Monday, May 6, as motorists adjust to this new configuration.

Why are we doing this?
Reducing I-5 by two lanes for five days is a big ask, but we have good reason to do it. Three good reasons in fact.

First, with this uninterrupted lane reduction, crews will condense 30 nights of work into five days. This will save us time and money because workers will only need to set up and take down traffic control once rather than 30 times. It also means fewer delays for late-night and early-morning travelers.

Second, the quality of work will be higher because the crews can focus on the concrete and not be preoccupied with reopening the highway in time for the morning commute. A higher quality product means the road will stay smoother for longer.

Third – and probably most important – we're doing this to keep our crews safe. Working this five-day stretch means crews will spend less time working alongside 70 mph traffic with just plastic barrels to protect them.

During their shifts, crews are just feet away from vehicles traveling at freeway speeds. This around-the-clock work will mean crews will spend less time in harm's way.

Plan ahead
Alternate routes around this work zone are limited in this neck of the woods. If you're like me and need to use this stretch of I-5 between May 5-10, consider other options to help you avoid the backups:
Stay up-to-date with the project and the traffic backups by following our WSDOT North Twitter account and signing up for our weekly Skagit County construction emails.
Posted by Ryan Lanier at Wednesday, May 01, 2019

Email ThisBlogThis!Share to TwitterShare to FacebookShare to Pinterest
Labels: I-5, I-5 construction, paving, Skagit County