The research behind our SR 99 Tunnel educational campaign

Since our educational campaign for the new SR 99 tunnel in Seattle launched, we’ve received a lot of questions. The media have prominently featured the viaduct closure and the tunnel opening, so why did we need to spend money on billboards, commercials, and other forms of paid media?

This campaign is teaching people how their commute will change with the tunnel and giving them all of the tools to learn more about their commute online at 99tunnel.com.

One of the big changes drivers will have to adjust to is the new route of the tunnel. There are no longer any mid-town entrances or exits like there were on the Alaskan Way Viaduct. In late 2017, we surveyed approximately 1,000 drivers in the Seattle-area who live in zip codes serviced by the SR 99 corridor. The survey showed that only 30 percent of respondents knew there would be no entrances and no exits to downtown in the tunnel and that they would need to exit before or after the tunnel to get to destinations downtown.

With lower awareness of these major changes to the SR 99 corridor’s route through Seattle, we realized we needed to reach drivers and provide them with information on how their commute will change.

Our experience with opening the I-405 express toll lanes and SR 520 Bridge has shown us that a robust educational campaign with traditional media, grassroots outreach and social media engagement are all essential in reaching the broadest possible audience.

By using different avenues to reach drivers, we’re able to provide them with the tools they need to figure out their specific route, on their own time as specific routes are unique to each individual driver. 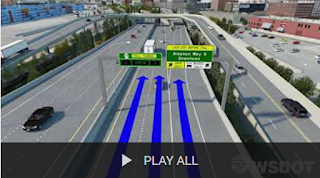 When people visit our resources available at 99tunnel.com, such as these videos that focus on how to use the tunnel, they can better understand the route of the tunnel which will help reduce the potential for confusion or frustration. More importantly, an educated driver is a safer driver.

Tolling will start as early as this summer and closer to toll commencement, there will be a second phase of the educational campaign focusing on tolling in the tunnel, and how Good To Go! works. In the survey we mentioned above, 67 percent of drivers who didn’t have a Good To Go! account were unaware that they would pay a lower toll rate with a Good To Go! account. Drivers who know how to use the tunnel and have a Good To Go! pass to pay the lowest rate will be more likely to choose the tunnel when tolling starts. Our hope is that this helps reduce the number of drivers who seek alternate routes, such as city streets and I-5.

We dedicated $4.4 million of the overall $3.3 billion viaduct replacement program budget to this educational marketing campaign. About two-thirds of the campaign budget, or $2.8 million, pays for the costs of placing ads on television, radio, print, billboards and more. These costs are not small, but represent the cost of reaching drivers in the 12th biggest media market in the United States. The remaining $1.6 million went to research to ensure we developed the most effective campaign possible, development and production of the campaign.