History shows highway closure will be a major challenge

On Friday night, Jan. 11 2019, State Route 99/Alaskan Way Viaduct in downtown Seattle will close for good. That will mark the beginning of roughly three weeks of intensive construction work to move the roadway into the new SR 99 tunnel.

We know, this is going to be rough. This will be the longest highway closure the Puget Sound region has ever experienced. More than 90,000 vehicles travel the viaduct each day and history shows that congestion worsens considerably during a viaduct closure – no matter what roads you travel on near Seattle.

That’s why planning ahead is so important. Reducing trips during the closure will help everyone. Any adjustments you can make – whether it’s trying a mode of transportation other than driving, trying to form a carpool, teleworking or canceling non-necessary trips – will make a difference. We understand this isn’t a possibility for everyone all the time, but every little bit helps.

While we can’t predict exactly what traffic will look like during the closure, history does give us some insight into what we might expect.

Looking back for info

Let’s use 2016 as a guide. From April 29 to May 8 of that year, SR 99/Alaskan Way Viaduct closed as the tunneling machine Bertha crossed underneath into downtown Seattle. We know many commuters heeded the call to change their commutes. For instance, the King County Water Taxi to and from West Seattle saw a 130 percent jump in riders. But we also know that commutes were rougher on all highways near Seattle. They started earlier, and they lasted longer. The same was true for Seattle city streets.

The graphs below show some of the data and you can see more from that closure on our webpage (pdf 2 mb). 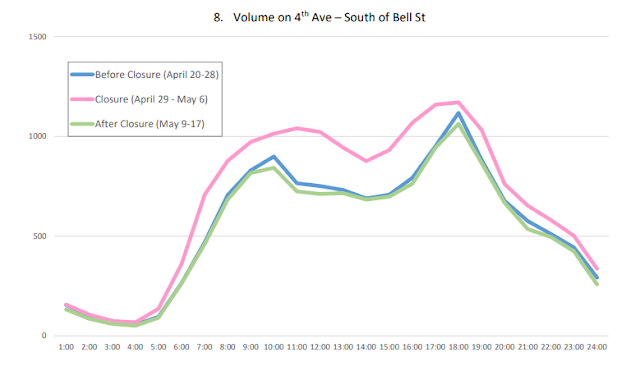 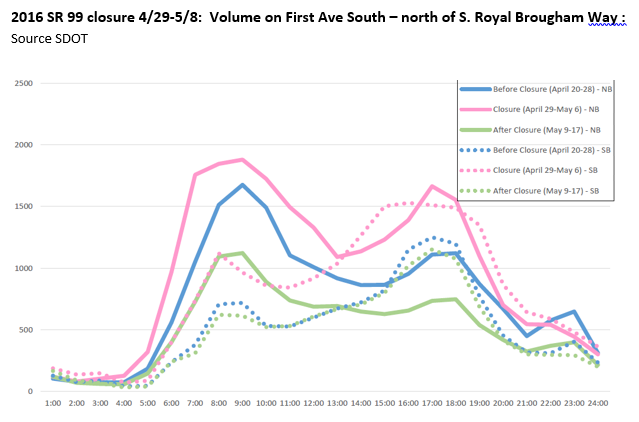 The bottom line? If you plan on traveling anywhere near Seattle during the three week closure, consider changing how you get around (pdf 649 kb). If you can, work from home, try bus, light rail or Sounder trains, take the Water Taxi, share a ride, walk or bike if it’s available to you.

If you can change your routine even for as little as one day a week, it will lessen the strain on your neighbors and on yourself.
Posted by WSDOT at Wednesday, December 12, 2018

I am having trouble finding information about getting from the water taxi downtown terminal to the main bus arterial downtown by foot. Is this information posted anywhere? Will there be any shuttles? Thank you.

I'll be heading to the airport from Everett mid-day on the 11th. Should I allow for extra time even though the official closure won't begin until 10pm?

Since traffic and accidents can be unpredictable, it's always wise to check traffic conditions and make your decision based on current information.

Stay up to date with the WSDOT app.