We want to welcome home the first fish to find their way through the newly redirected and restored Little Pilchuck Creek in Snohomish County! Just weeks after the bulk of this $6 million project to widen the passage under SR 92 wrapped, we caught our first glimpse of migratory fish in their new digs. 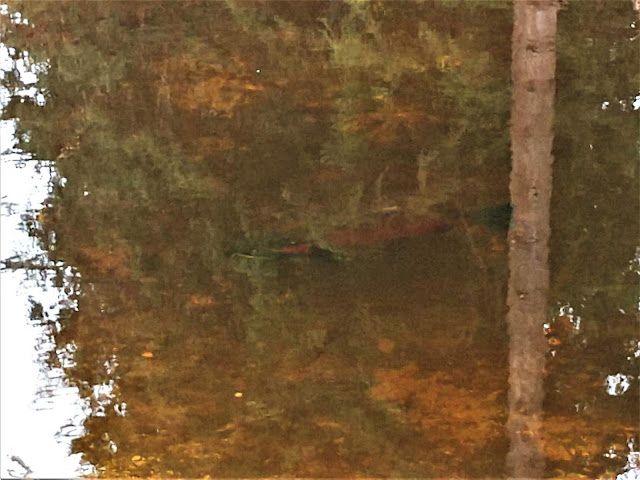 What we did
Before the renovation, migrating fish crammed through a tiny and fast-flowing 12-foot box culvert under SR 92 at North Machias Road in Lake Stevens. In June 2018, contractor crews with Graham Contracting, Ltd. removed that existing tiny culvert and replaced it with a 66-foot wide arched bridge.

The new wider creek bed, which was also designed to be less steep, has slowed down the speed of the water, making it easier for migratory species such as trout and salmon, to pass under SR 92. The new bridge was then buried under a few feet of dirt, and the highway was paved back on top.

Crews built the new bridge piece-by-piece over 18 days. We condensed the work into this one-minute video.
Forget shiplap
As any fan of home decorating knows, old wood can be repurposed in numerous ways in a new home .. even for fish. In this case, we took woody debris (think: dead tree trunks and buried logs) that were dug up, exposed or removed during the clearing process and placed them downstream to provide natural “rest stops” during migration.

Bonus: just like any home improvement project, repurposing the old wood allowed us to save some money on this project.

Down to the studs
This strategy of rebuilding the creek from the ground up allowed our design and construction teams to restore Little Pilchuck back to its natural state. This project helped us comply with a U.S. District court ruling regarding historical tribal fishing rights. It also expanded fish access to almost 30 miles of habitat upstream.

Closing credits
Anyone who has done a home improvement project knows they’re not all the same. This fish passage project was much more involved than most. We want to thank everyone who altered their plans, took the detour, took alternative routes, carpooled and made other changes to their daily routines during the closures and delays associated with this project.
Posted by WSDOT at Friday, November 02, 2018