An early gift for Tacoma Mall holiday shoppers from Skanska

Just in time for the holidays, a temporary lane configuration that sends eastbound State Route 16 drivers on a 2-mile detour to reach the west side of I-5 in Tacoma will be removed as early as Friday morning, Nov. 16, weather permitting.

Design-build contractor Skanska recently finished building a temporary ramp that will allow I-705, SR 7 and Pacific Avenue drivers to merge on to southbound I-5 without having to use exit 132A/South 38th Street ramp. 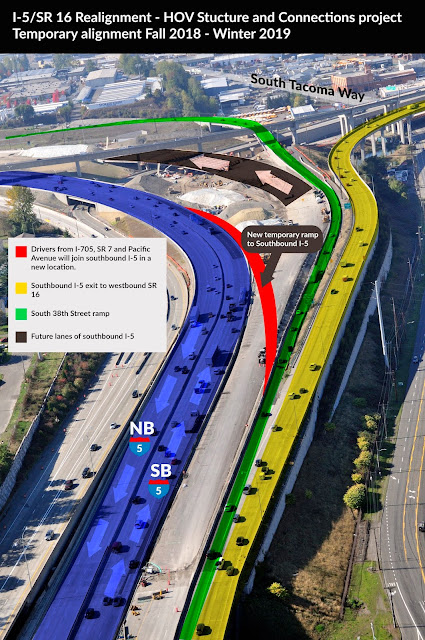 Drivers coming from downtown Tacoma were also merging with those coming from eastbound SR 16 to southbound I-5. While it is true that this merge has always been in place, the distance to make this merge shortened. To reduce the potential for collisions, traffic control was installed preventing eastbound SR 16 drivers from merging across two lanes of traffic to exit South 38th Street west. For their safety, drivers were detoured to the South 56th Street exit, back on to northbound I-5, and to exit 132. While this wasn’t popular with drivers, it was necessary due to the amount of traffic on both ramps.

Once the temporary ramp is open, traffic volumes on exit 132A/South 38th Street exit will be reduced.

Safety first while driving through work zones
We’ve all experienced first-hand the increased traffic congestion near a mall or shopping center during the holidays. This change in ramp configurations will help traffic get to shopping areas more easily during the holidays. Still, be sure to pay attention to your driving, especially through work zones, and give yourself plenty of travel time to enjoy your shopping adventures.

This new ramp is terrifying. You join on a curve and the merge lane is not long enough. Cars don’t move over bc they don’t have time to see you coming. Someone is going to get seriously hurt.