Win the day: Traveling to and from Martin Stadium this weekend

A Crimson and Gray wave is headed to Pullman Friday night and Saturday morning as ESPN's Gameday broadcasts from Washington State University. So, anyone traveling in the area should be prepared.

What's all the fuss?
For those of you who don't bleed crimson and gray, Saturday's broadcast is the culmination of a 15-year campaign – 15 years! – to bring the popular football preview show to Pullman. As part of those efforts, a traveling WSU flag named Ol' Crimson has appeared at 216 consecutive Gameday broadcasts across the country. The flag is express mailed to each week's location by a band of Coug alumni and boosters who chronicle the efforts on Facebook and Twitter. This Wave the Flag movement has become an intense source of pride for Coug fans.

So, as soon as ESPN finally made Coug dreams come true, WSU fans from all over began scrambling to get to Pullman. The 4:30 p.m. football game pitting No. 25 WSU against No. 12 Oregon is sold out and every hotel room on the Palouse is booked. (This weekend is also the nearby University of Idaho's Homecoming game).

Have a game plan
So, what should you do if you're joining the WSU fan festivities – or just planning to be in the general vicinity? 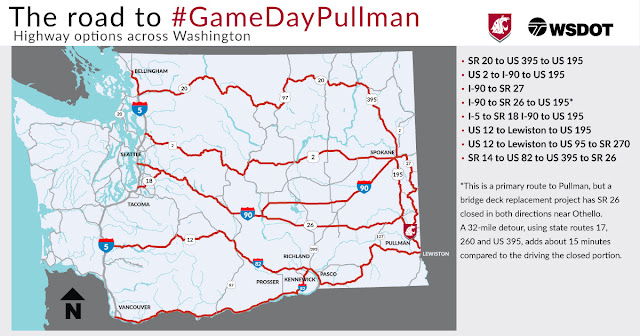 Be safe, Cougs!
Follow these tips to keep yourself and other fans safe and so that you're there for Gameday and in the stands for kick-off yelling, "Go Cougs!" with 35,117 of your closest Coug friends (and a few Ducks that might waddle their way in).
Posted by Ryan Lanier at Wednesday, October 17, 2018

Well played, WSDOT! Very witty, but I would expect nothing less from WSU Cougars!