It's exciting that we're only a few months away from the opening of the new State Route 99 tunnel under downtown Seattle. The tunnel will dramatically change the way people get around Seattle. There will be no mid-town entrances and exits like the Alaskan Way Viaduct has today. The tunnel's entrances and exits will move farther north near the Space Needle and farther south near the sports stadiums. Will your trip be shorter or longer? Better or worse? The answer depends on your destination. 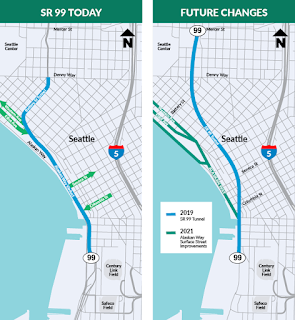 Traffic patterns will change over time
While we're excited about the opening of the SR 99 tunnel, it's important to remember that this is ultimately a safety project, not a congestion-relief project. The tunnel was one part of the plan to replace the aging Alaskan Way Viaduct, which was vulnerable in case of an earthquake. It is designed to work in combination with a new Alaskan Way surface street which will not be complete until 2021.

Seattle traffic patterns will change at different points in time. There will be a big adjustment when the tunnel first opens and another shift when tolling begins, which could be as soon as summer 2019. Traffic patterns will finally settle when the new Alaskan Way surface street opens.

The tunnel will be a more direct route for drivers who want to get through downtown. On the other hand, the tunnel will not have the same ramps to downtown at Seneca St., Columbia St., and Western Ave. as the current viaduct does. So we expect downtown traffic to shift away from the parts of downtown which had been connected to the current viaduct and shift towards the new tunnel entrances and exits in South Lake Union and SoDo.

Predictions for tunnel usage
After the tunnel opens, we expect it will take a few months for traffic patterns to settle as drivers try out different routes to find what works best for them. While not everyone who uses the viaduct today will use the tunnel, we expect other drivers will find that the tunnel is a quicker option than the route they take today.

Our traffic predictions show that before tolling begins, there will likely be more drivers using the tunnel during peak periods than use the viaduct today. There are about 5,200 vehicles per hour which currently use the northern section of the viaduct at peak times (6 - 9 a.m. and 3 - 6 p.m.). The tunnel could potentially carry as many as 7,000 vehicles per hour based on our traffic forecasts.

More changes when tolling begins
The tunnel will be toll-free when it first opens, with tolling expected to begin as soon as summer 2019. The Washington State Transportation Commission has set toll rates ranging from $1 to $2.25 with a Good To Go! pass depending on time of day.

Tolls will cause traffic patterns to change again. When tolling first begins, we expect the number of vehicles travelling through the tunnel to drop to between 4,000 to 5,000 vehicles per hour during peak periods. Drivers leaving the tunnel might choose to go to I-5, Alaskan Way, or local streets.
We also expect a gradual return to the tunnel as more drivers create Good To Go! accounts and get a better sense of the value of the time they save by using the tunnel. We've seen this pattern on the SR 520 Bridge and other toll roads around the country.

Waterfront improvements will be completed in 2021
Ultimately, traffic patterns won't truly settle until the future Alaskan Way surface street improvements are completed in 2021. The new Alaskan Way is designed to work with the tunnel and give drivers multiple options to get into and through downtown. Overall, the two routes are expected to carry 5,000 to 6,000 vehicles per hour during peak periods and will work together to  replace the function of the Alaskan Way Viaduct.

Time will tell
Much like a weather forecast, these traffic projections aren't an absolute certainty but they do give us a glimpse into how traffic patterns may change over time. These projections are our best attempts to predict what people may choose to do based on a model of an extremely complex and constantly changing system.

After the tunnel opens, we will continue to monitor traffic patterns and will give updates about what we see. Ultimately, the new tunnel, in combination with several other major construction projects, means that we can expect several years of change before traffic patterns truly settle down.
Posted by Ryan Lanier at Tuesday, October 16, 2018

So we lose the beautiful waterfront view, right?

The waterfront views from the viaduct certainly are special. But removing a tall, loud, aging, concrete highway from the shoreline will help transform Seattle’s central waterfront. The City of Seattle will come in after the viaduct is removed and rebuild the area with new paths, parks, and access points to the water. You can learn more about that project at www.waterfrontseattle.org.

75% of downtown commuters don’t drive. The bulk of those people are in buses. Any thoughts on how these changing traffic patterns will impact the 75% who aren’t driving downtown?

Dearest WSDOT, the view we love is not the same view of the water, we can already see that from the park and the Market Windows, the view that you robbed from us all is the city, OUR CITY, the ability to look up the streets, our across the buildings, from the Needle to the Siren. The "view" always has been the city.
It is the best view, and many locals drive it for the simple pleasure.

KJ, you’re right, the views in all directions from the viaduct are pretty special. We are planning a public grand opening celebration for the tunnel that will include an opportunity for people to walk on the viaduct one last time. Stay tuned for more details on that event soon.

@Natehc1984 – We all share the same streets, so these changing traffic patterns will affect everyone who travels downtown. It's not just the tunnel, there are a lot of other construction projects and changes happening around the same time which are going to make the next few years a challenging time for everyone.

Buses which currently use the Seneca St. and Columbia St. viaduct ramps (like the Rapid Ride C or Route 120) are going to need to change routes and exit SR 99 earlier and get through downtown a different way. King County Metro hasn't announced whether they're planning on running any buses through the SR 99 tunnel. The long term plans for the Alaskan Way surface street include transit lanes, which will help once that project is complete.

Even if your bus doesn't go on SR 99, there are unrelated plans for other transit route changes which could affect you. In Spring 2019, all the buses which currently use the existing downtown transit tunnel will move to surface streets because of Convention Center construction. This will have a big effect on all downtown traffic patterns too.

While driving, you should be focused on driving, not the views. Glad to see this safety improvement project finally come to completion!

It's going to be a challenging few years along Alaskan Way while construction is occurring, but the eventual plans include improved connections to the rest of downtown for people in cars, buses, bikes and on foot. During viaduct removal WSDOT is helping keep traffic moving on Alaskan Way in two main ways. First, earlier this month we moved Alaskan Way west, out from beneath the viaduct. This added lanes to the street (now two in each direction) and will keep it open during the viaduct removal. Second, we are planning to keep Alaskan Way open with at least 1 lane in each direction while we work to remove the viaduct, and will also limit which east/west streets under the viaduct can be closed at the same time. It's also worth noting that we will keep pedestrian bridge access to Colman Dock and the waterfront open, although a new bridge will be built as part of the viaduct removal work.

After we remove the viaduct, the City of Seattle will rebuild Alaskan Way, a project that includes new pedestrian bridges and a public pathway from Pike Place Market allowing people to reach the waterfront without ever having to cross a street. You can learn more about that here: https://waterfrontseattle.org/overlook-walk

After reading your predictions on traffic changes after the tunnel and tolling, it seems that there are a few gaps in the analysis. After our experience with the Mercer Street, the new stadiums, and the initial viaduct removal it seems you should discuss the obvious.

1) What is the traffic prediction for the north portal area between I-5 and Queen Anne Avenue along the Mercer Street corridor when the tunnel is operational? And then with tolling?

2) What is the traffic prediction for the south portal area for 1st Avenue, 4th Avenue, the I-90 ramps, stadium cross streets, and etc when the tunnel is operational? And then with tolling?

3) What are the traffic predictions at both north and south portals on traffic filtering into downtown given the loss of the 4 viaduct on/off ramps in downtown when the tunnel is operational? And then with tolling?

I am relatively new to the area and have been curious as to the reason for this very expensive project. In summary, the WSDOT comments add up to a giving Seattle a more attractive waterfront with less capacity for moving vehicles.

HouseLady, the Alaskan Way Viaduct Replacement Program is a safety project. After the 2001 Nisqually earthquake, the region woke up to the fact that the viaduct was in danger of collapsing in a major earthquake. Many different options for replacing the structure were considered and examined. The final plan is a deep-bore tunnel (set to open soon) and a new waterfront surface street to be built once the viaduct is removed.

Enough of taxes and tolls said...

Will the tolls stop after tax payers have pairs there share? Why are we getting tolled? We have one of the highest state gas tax in the country which that was supposed to pay for highway improvements and congestion relief.
If we're going to pay high taxes to drive we should have one or the other (taxes registration tolls) but not all the above.
Seattle has become the TAX city.
Give a break!