Please help us keep everyone safe on our roadways

Sixty-four ounces of Slushee and someone's terrible decision nearly cost Trent Galusha his life on the side of I-5 six years ago.

Galusha is one of our Incident Response Team drivers, workers who spend their days driving the highways helping stranded motorists and protecting first responders at crash sites. During the 2012 Memorial Day weekend he was helping someone who had run out of gas – a standard part of his day.

Then suddenly, a young man driving by – impaired and with a suspended license – thought it would be funny to chuck the frozen beverage at Galusha on the side of the road. The drink came flying out of a car going at least 60 mph, striking Galusha in the head with 300 pounds of force.
Galusha doesn't remember the impact – all he knows is that he was walking back to his truck and the next thing he knew he saw white lights. He'd later learn that he had traumatic brain injury. He spent seven months off work, retraining his brain how to process again and struggling with pain and unpredictable rage. It took two years before he fully felt like himself again.

"My family didn't sign up for that," he recalled last month. "It shook my world. It shook my family's world. I wouldn't wish this on anyone."

Doctors told Galusha he was lucky to be alive. If the cup had hit him in the temple – just two inches away from where it did strike him – he could have died instantly.

Unfortunately, Galusha is not alone. And that's why we'll be spending the next month sharing work zone safety messages with the public.

We're turning both our website and Seattle's SR 520 bridge sentinels orange this week. On Monday, April 9, for National Work Zone Awareness Week, we'll fill a lawn near the Capital in Olympia with 60 orange work zone barrels – one for every WSDOT worker killed on the job since 1950. We'll also share safety messages and employee stories.

Far too many of our workers have been hurt by drivers not paying attention or losing control of their vehicle. Other times, workers trying to keep everyone safe are sworn at or have things thrown at them by people upset by roadwork delays. (In Galusha's case the driver was caught and sent to prison). 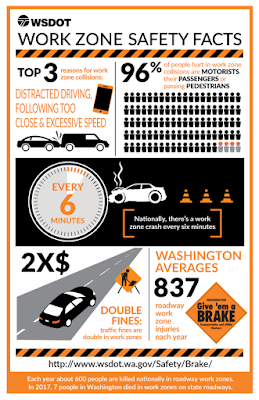 "If you've ever been stranded on the side of the road you remember how your car shook every time another vehicle zoomed past at 60 or 70 mph," said IRT driver Ken Buretta, who suffered a concussion after being sideswiped as he was getting out of his truck to help someone on Thanksgiving Day 2016. "Imagine what it's like to work in that."

"We're not feet away from death, you're honestly less than 10 inches away," Galusha said. "And most people are great – I love being out there and helping people – but it's that three percent who don't slow down or aren't paying attention. … I bet you I see 30 plus people a day still texting and driving or watching videos while driving."

Nationally, there's a collision in a work zone every six minutes. Here in Washington we average 837 roadway work zone injuries each year – and had seven fatal work zone crashes in 2017. And it's not just workers at risk. In Washington, 96 percent of people hurt in state work zone crashes are drivers, their passengers or passing pedestrians.

Please, help us keep everyone safe in and near work zones. We need drivers to:
The next time you're driving past a work zone, please remember the workers like Galusha and Beretta who are out there to keep drivers safe or improve roadways.

"Whenever you see any lights – red, yellow, blue or whatever – just move over and give us some space," Buretta said. "We all need to go home to our families."
Posted by WSDOT at Monday, April 02, 2018