How your express toll lane dollars are spent 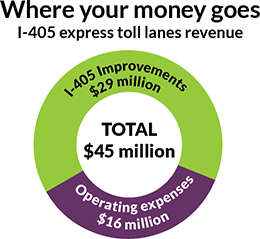 New financial numbers for the I-405 express toll lanes show that they have raised $44.5 million dollars in their first two years. As directed by the Legislature, money raised on I-405 is used for only two purposes: to cover operating expenses and, most importantly, to invest in improvements to I-405. Of the total, $28.8 million is being used to relieve congestion and improve travel for the people who use I-405 each day.

Let’s take a look at how that money is being spent and what investments we’re planning for the future. And if you’re interested, you can see the full financial reports here.

Most of the toll money goes to improve I-405
When you pay a toll, you’re probably thinking about how much time you’ll save, not how much money tolls are raising for future highway improvements. Two-thirds of the money from every toll is going to help improve performance on I-405.

In April, we invested $11.5 million to build the new peak-use shoulder lane from Canyon Park to Lynnwood. Toll revenue also paid for other improvements, such as a new merge lane in Bothell, which gave drivers space to merge in and out of the express toll lanes without slowing traffic behind them.

Together, these recent improvements have had a positive effect on the northbound afternoon commute. Traffic is flowing more smoothly across all lanes and toll rates went down. Now more people can get home faster whether or not they choose to pay a toll.

What comes next for I-405?
The remaining money is being kept in a dedicated fund specifically for more I-405 improvements, and the Legislature has asked us to study two future projects.

At the Legislature’s direction, we’ve begun working on some early design concepts to reduce congestion between Bothell and Lynnwood by rebuilding the SR 522 interchange. We are also analyzing construction of a new express toll lane in each direction up to SR 527. Ultimately, the Legislature will decide whether toll money should be used to build this project.

Breaking down the operating costs of the lanes
While two-thirds of the revenue generated by the express toll lanes will be invested back into I-405 improvements, the remaining third covers operating costs. Here is a breakdown of the expenses:

So, $15M additional cost to administer the toll lanes. And such items as the shoulder driving at Canyon Park is dangerous as well as absurd. And this is an ADDITIONAL $45M stolen from the taxpayers on top of the additional taxes for stupid projects like Rapid Transit and the trains that few can use to get to work. Much of this money was spent to get tourists from the airport, not to improve the commute. As I recall, we were told many years ago, when I405 was basically two lanes in each direction, that there was no room to expand it. Yet here we are with six or more lanes in each direction in some areas. Two to three of these lanes are toll lanes. Why not open them up to all commuters? And their commute time guarantees are never met. So, basically, this is a scam on the part of the government to APPEAR to be doing something when, if fact, all they are doing is scamming us out of more gas tax money. And, of course we have one of the highest gas taxes in the nation already PLUS the RTA sales tax, plus the RTA vehicle license tax. If taxpayers would wake up and "throw the bums out" of our state Congress, we might get some lower taxes. And 10.4% sales tax is OUTRAGEOUS.