How we measure I-405 express toll lanes results

A lot has changed in the Puget Sound region since the I-405 express toll lanes opened in 2015. With a new driver moving to the area every six minutes, the population boom poses a huge challenge to all of our roads. Before the express toll lanes opened, there was no way out of traffic on I-405 but now people have a choice for a faster trip when they need it. While I-405 still experiences daily congestion, the express toll lanes are providing a more dependable option than the old HOV lanes could and even people in the regular lanes are moving faster in most areas than they were two years ago, despite there being more vehicles on the road than ever before.

I-405 is moving more people than ever before
The population boom means more vehicles are using every major Puget Sound highway, and none has seen as rapid a growth as I-405 between Bellevue and Bothell. Traffic volumes in this area have increased twice as fast as on I-5 through Seattle, and this section of I-405 is carrying 10 percent more vehicles a day than it did two years ago.

But even with more people, this portion of I-405 is now moving as fast or faster across all lanes than it was two years ago.

Every day, more than 60,000 drivers choose to use the express toll lanes for a faster trip. About two-thirds of those people are choosing to pay a toll, and a third are riding in the lanes for free in a carpool, motorcycle, or bus.

Support for express toll lanes has also increased. When we surveyed I-405 drivers this summer, about two-thirds of people agreed that they liked the option to use the express toll lanes and believed they reduce congestion for some trips in the regular lanes.

How do we measure success?
One way that we measure success is to look at the percentage of time during peak periods when the express toll lanes are able to move at 45 mph or faster. That's roughly the speed when the system is flowing most smoothly and carrying the greatest number of vehicles at a time. When the express toll lanes opened, the state legislature set a goal that they would move at this speed 90 percent of the time. 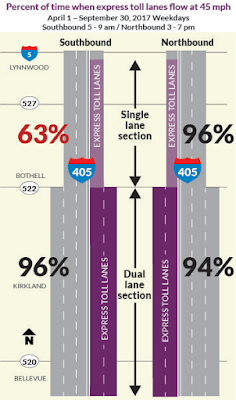 By that measurement, the express toll lanes are flowing at least 45 mph about 95 percent of the time in most places. That's a success in most locations, however the area between Bothell and Lynnwood is a bit more complicated. This section of highway has fewer lanes, and when the express toll lanes first opened, they struggled to keep up with population growth in this area. Today, drivers are experiencing a much smoother commute northbound heading home in the afternoons since we made several changes to give drivers more space to merge, improve access points, and build a new peak-use shoulder lane.

But the southbound morning commute from Lynnwood to Bothell is still a big challenge. This area only moves at 45 mph about 63 percent of the time. Moreover, this challenging section brings the overall average for the entire system down to 85 percent, just short of the 90 percent goal. The old HOV lanes only met this standard 56 percent of the time in 2015, so this is a still an improvement compared to two years ago despite all the new cars on the road.

What does this mean for future travel on I-405?
When the express toll lanes were authorized, the Legislature provided two metrics by which to measure the lanes' success during the first two years of operation: that the lanes pay for themselves, and that traffic moves at 45 mph 90 percent of the time during peak travel times. The lanes are meeting the first measure easily, and are coming close to the second. Now that the lanes have been operating for two full years, we're working with legislators to determine the next steps for the express toll lanes.

Next steps? The next step is that the Extortion Lanes are removed IMMEDIATELY! You had a two year trial period with the agreement that if the 45 MPH metric failed, the tolls would be removed. Well, you failed....miserably, and as predicted. Every report has shown 45MPH being achieved in the low 80% range, except for your near 90% figure. No surprise there as every stat related to the Extortion Lanes you've posted on this blog have been outright lies.

So, by the agreement laid down at the beginning of this abomination, the tolls should have been shut down in September. Any tolls collected after that point is theft and I'm looking forward to the class action lawsuit.

You think the shoulder lane as you near the I-5 interchange has had a POSITIVE effect? If by positive you mean it has backed up traffic entering I-5 2 miles ON TO 405, causing a seriously dangerous situation, then yes you are correct?

I assure you, the shoulder lane has done nothing except make traffic in that area exponentially worse. That used to be the one single area in the whole 405 Extortion Zone disaster that actually moved. Now its a white knuckle death dodge as you wait for the moment a car jumps out of the two mile back up right in front of you in an attempt to exit at Alderwood instead....just to escape the gridlock the shoulder lane has CAUSED.

Once again lying with statistics. WSDOT, you are pathetic.
First of all, the increase in performance is due to increased capacity by 25% in the Kirkland portion and 33% where hard shoulder running was added. Note that the segment where only tolling was implemented, it still fails. In other words, tolling did not improve it.

Second, you are not considering all the carpools you split up when you banned 2 person carpools from the HOT lane. That was 90% of the cars in that lane before tolling. Those carpools have split up, increasing about 1000 cars per hour on the highway.

Third, your survey did not take a cross section of the public. This is called Sample Bias. Your survey is total BS. Also note that 40% of the people you surveyed DO NOT WANT THE TOLLS. Hello? McFly? For a more complete analysis of the bogus WSDOT report, visit https://stop405tolls.org/2017/12/11/revealing-the-deceptions-in-wsdots-report-on-405etl-2-year-performance/

Most of my southbound commuting on I-405 is in the mid morning traffic between 7 and 9am. My commute takes me approx. 160 miles one way twice a week. I find it interesting that my average speed between Lynnwood and Woodinville interchange seem to average 20 to 25 mph stop and go [the same speed as the mainline next to me] traffic.
I often wonder why I am paying as much as $10.00 to be in that lane while going no faster then everyone in the standard lanes to my right and no traffic obstructions causing the slow down.
Now I hear the chatter about taking the $10.00 max. limit off and charging even more possibly with no ceiling on the fee. My understanding was in the first two years of the fee DOT raked in over twice the money projected and now you want more.

After the vehicle license tab overcharging that we were misled into approving and paying. I cam ready to shut down my "Good to Go" account and go back to adding an hour more to my commute and saving $10.00 or more 4 times a week which really gets me because my primary vehicle is only a two passenger.

The extortion toll lanes have been the biggest mistake in transportation history and one of the biggest ripoffs of the public in recent memory. The failed toll lanes have make congestion much much worse and everyone knows this. They have casused so much congestion and diversion as they continue to send traffic into neighborhoods where there was never an issue before. We would all be better off if the extortion tolls were suspended ASAP. The new and improved configuration would be 4 general purpose lanes and 1 HOV lane. It is awful that the Texas company where some of the toll revenue goes discourages adding general purpose lanes, that way the congestion continues and the toll revenue comes in, what a joke! We need the general purpose lanes we were originally promised in the original master plan, NOT extortion toll lanes. We will win this fight and this failed extortion toll experiment will soon be a distant memory. Real lanes for Real People! NO TOLL ON I405.

According to WSDOT's own 24 months of operations report, number of those saying that traffic got worse exceeds those saying it got better by 2:1 ratio (page 11). And this is according to survey where users of ETLs were heavily overrepresented!

Thanks, Eugene. Here’s a link to the survey for everyone else’s benefit: http://bit.ly/2vIprwJ. We asked I-405 drivers how they thought toll lanes had affected traffic. 33% thought traffic had gotten worse, 32% thought it had stayed the same, 16% though traffic improved and 20% said they didn’t know.

Yes, that is one way to look at that question, although we’d also point out that only a third of people thought traffic had gotten worse while half thought it had not. The difference all depends on how you look at all the people who said that I-405 traffic had not changed since the express toll lanes opened. We actually think that it’s pretty impressive that so many people feel traffic hasn’t changed even though there are now so many more cars on the road today.

The same survey also showed that 64% of I-405 drivers thought that express toll lanes reduce congestion in the regular lanes. So clearly, a lot of the people believe that the express toll lanes help a bit even if they can’t completely undo the effects of the population boom.

We should also clarify that only 40% of the people who took this survey had used the express toll lanes in the past year.