When are tolls worth it?

Everyday, more than 51,000 drivers choose to use the I-405 express toll lanes. Drivers tell us they like having the choice for a faster trip when they really need it but sometimes it's hard to tell exactly how much time you're saving because toll rates change in confusing ways.

Tolls can reach $10 when congestion is heavy. For most people, $10 is only worth it when you're in a rush to something really important but is too much to spend every day. We understand that, and that's what makes it all work. When traffic is at its worst, higher tolls help traffic so that these lanes can move as many people as possible without jamming up. That's how we make sure that you have a dependable way out of traffic when you really need it.
The value of time
Time is money, so exactly how much time do you save when you pay to use the express toll lanes? Do you get a deal when the tolls are high or low?

Sometimes there are slow spots but you can save a lot of time overall on the full trip. To do this math, we looked at how much time drivers saved for a trip all the way between Bellevue and Lynnwood. We also only looked at data for the peak times of day.

The graph below shows the average minutes saved on full corridor trips during peak periods compared to the rates displayed during those trips. 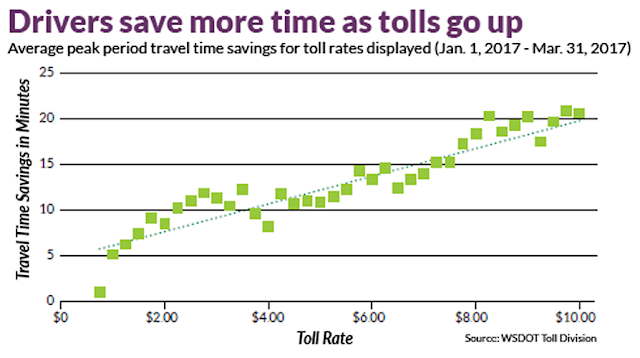 How is this possible?
It is frustrating spending $10 and then hitting a slow spot in the express toll lanes. If that's happened to you, you're probably feeling a little skeptical right now. But remember, high toll rates mean that the express toll lanes have started to get crowded and we're trying to keep it under control.

On average, express toll lanes move about 19-24 miles per hour faster than the regular lanes at peak times. That doesn't mean there's never a slow spot, but overall these lanes run way more smoothly than the old HOV lanes did a few years ago.

We try to keep things moving at around 45 miles per hour, because that's the most efficient speed for moving the most cars at a time. When traffic is at its worst, each express toll lane can carry up to 30 percent more cars than a regular lane in some locations at the height of the peak commute relieving some pressure on the regular lanes. So even on the days when the toll isn't worth it to you, at least you know that it's freeing up some space in the regular lanes around you when other drivers choose to pay.
Posted by Ryan Lanier at Thursday, August 31, 2017

The time saved for a few is not worth the congestion that the majority of the public goes the on a daily basis. The tolling experiment on I405 has been the biggest mistake in transportation history and one of the biggest ripoffs of the public in recent memory. The extortion tolls were forced onto the public with deception, propaganda and lies. The tolls have made congestion much much worse and everyone knows this. I have been driving I405 for years and I have never seen a project create so much congestion. The tolls have been sending cars on side streets and they have created so much diversion that cars are cutting through neighborhoods where there has never been an issue before. It is awful that the Texas company where some of the toll revenue goes discourages adding general purpose lanes, that way the congestion continues and the toll revenue comes in. What a joke! If the failed extortion lanes are added to the southern part of I405, it will create a traffic catastrophe sending thousands of additional cars through our neighborhoods. The truth is we would all be better off if the extortion toll lane experiment were suspended ASAP! The new and improved configuration would be 4 general purpose lanes and 1 HOV lane. The southern part of I405 would get the additional general purpose lane we desperately need. We were promised 2 general purpose lanes not extortion toll lanes.
It's time to do what's right and admit that this experiment was a failure and suspended the toll lanes so we can get traffic moving again.
Real Lanes for Real People!

Notice how W$DOT never responds when confronted with facts? I think they finally realize that people are waking up to the fact that W$DOT is the single most corrupt entity in Washington state. They need to be fought, resisted, undermined, blocked, protested and, ultimately, completely scrapped and rebuilt. This blog, and the lies repeatedly stated as fact, is exhibit A.

I absolutely love the toll lanes. It's great to have an option to go faster when needed (to avoid being late to work, to get to a doctors appt, to pick up kids from daycare). The toll lanes make sure that the lanes operate at maximum efficiency/throughput when traffic moves at 45mph. It would be great to toll all the lanes and use economics of pricing to control supply and demand. I'd even be up for the state to sell off the toll lanes to a private entity as many folks don't believe that governments should follow basic capitalistic economics like pricing driving supply and demand.