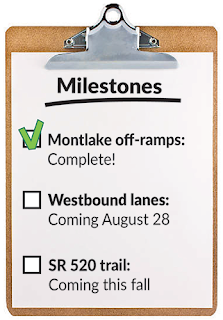 In just a few short days, the new State Route 520 West Approach Bridge North is opening to full capacity for the first time. At 5 a.m. on Monday, Aug. 28, westbound drivers will take their inaugural drive in two new general purpose lanes, and carpoolers and transit riders will see their HOV lane extended farther west from the floating bridge to the new lanes.

Just weeks after last month’s opening of the new westbound off-ramps, we’re on track to open the general purpose and HOV lanes as the second of three major project milestones in 2017. The final milestone? Later this fall we will open the SR 520 trail from the floating bridge to Montlake - giving bicyclists and pedestrians a new, safe route across Lake Washington.


SR 520 closed Aug. 25 – Aug. 28
Crews need time and space to prepare the new bridge for vehicles. To complete the work necessary to open the new lanes, SR 520 will be closed in both directions from 92nd Avenue NE to Montlake Boulevard from 11 p.m. Friday, Aug. 25, to 5 a.m. Monday, Aug. 28. So this weekend, drivers needing to cross the lake should use alternate routes like I-90.


Twitter
In these final months of West Approach Bridge North construction, we’d love to interact with you more. The first new @WSDOT_520 follower on Twitter that mentions this blog will win a free SR 520 Grand Opening hat. Good luck!

What's the holdup on opening the Bike Trail? Winter is coming. I want to ride across the lake while it is still nice out. :)