If you commute on northbound Interstate 405 between State Route 527 and I-5 in the afternoon, then you have most likely noticed or used the new peak-use shoulder lane. In late April, we used money collected from the I-405 express toll lanes to convert the existing shoulder to an additional travel lane during the afternoon commute, adding extra capacity to this congested stretch of roadway when it is most needed.

So far, we have succeeded in moving more vehicles through this area and decreasing travel times. It has been almost two months since the lane opened, so let’s explore the specific accomplishments of the project based on our first full month of performance data.

How many more vehicles are getting through?
Every weekday since opening, the peak-use shoulder lane has typically been open to traffic between 2 and 7 p.m. In the two months before the project was complete, an average of about 4,700 vehicles per hour were traveling on I-405 across all lanes just north of SR 527 between 4 and 5 p.m., the busiest time of the afternoon commute for that area.

With the addition of the shoulder lane, on average, more than 5,200 vehicles per hour are now traveling through this same section of the freeway at that time. More than 750 of those vehicles chose to use the peak-use shoulder lane. As a result, we are seeing less congestion in both the general purpose lanes and the express toll lanes, also resulting in lower average toll rates for an even more reliable trip in the express toll lanes during this time.

How much time are people saving on their commutes?
Between Bellevue and I-5:
In the two months before the peak-use shoulder lane opened, drivers commuting at the busiest times on the corridor were spending an average of about 38 minutes in traffic in the general purpose lanes. Thanks to the peak-use shoulder lane, drivers commuting at the same time in the general purpose lanes are saving on average between 10 and 15 minutes for this 17-mile trip.

Between SR 522 and I-5:
Commuters in the general purpose lanes were spending an average of about 20 minutes to drive about 7 miles. Thanks to the peak-use shoulder lane, the travel time for this trip has decreased by about half on average.

Is traffic flowing more smoothly?
For an example of how traffic has changed since the peak-use shoulder lane opened, check out the two flow maps below. These diagrams represent only a snapshot in time for the area between SR 522 and I-5, and we recognize that conditions can change daily, but these images help give a sense for how traffic has improved. 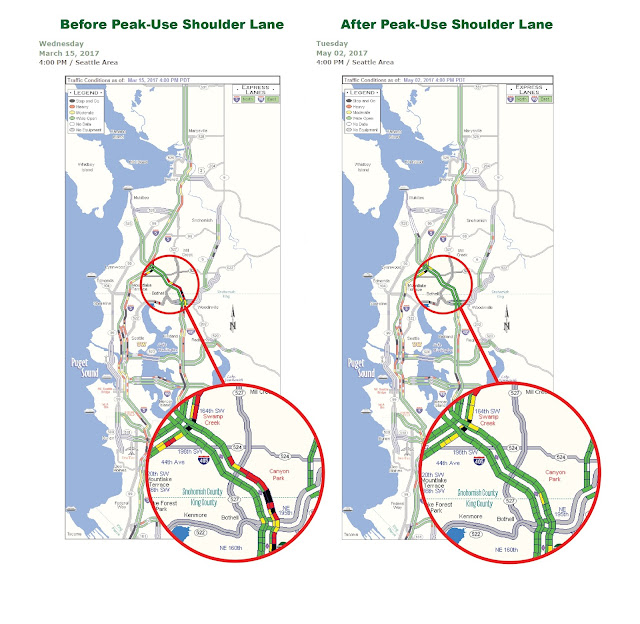 Now, will you show the data when the inevitable happens? #InducedDemand (see Induced Demand Proven ) makes this money spent a waste? And those cheering today will just be asking for another billion or seven to be spent on the next expansion?

Now, will you show the data when the inevitable happens? #InducedDemand (see Induced Demand Proven ) makes this money spent a waste? And those cheering today will just be asking for another billion or seven to be spent on the next expansion?

Glen, yes, we will share data. The peak-use shoulder lane was a relatively quick fix to an emergent problem. We have long-term plans to extend the second express toll lane in each direction from Bothell to Lynnwood, which is a sustainable way to manage demand for highway capacity.

I simply cannot understand how our tax dollars are used to build the public infrastructure, yet we still need to pay an additional fee to use 3/5 of the highway? What kind of society do we live in?