Terry Dunn knows how quickly a life can change in a work zone. It took less than a minute for his whole world to turn upside down.

Terry was working as one of our asphalt inspectors near Colfax in the fall of 1995 when a contractor asphalt truck went into reverse through the job site.  There was a spotter on site, but the truck moved so quickly Terry never had a chance to do more than turn around and see it coming at him. The next thing he knew he was pinned under the heavy machine while laying on top of fresh, boiling hot asphalt.

He had burns, broken bones and nerve damage to his legs – and lots of pain. He remembers it feeling like someone was grabbing his toes and squeezing them with pliers. Even worse, he had a wife, an infant son and two adopted special needs children at home – and no idea how he'd take care of them.

After six surgeries and lots of physical therapy, Terry was able to make a partial recovery, but his life and the life of his family has been forever altered due to the extent of his injuries. He returned to a desk job in utility permitting rather than construction, because he can no longer stand for long periods. He and his wife raised their children, adopting three more over the years, but he hasn't been able to coach his kids in sports or even play ball with them in the yard. The outdoor activities he loved, like camping and visiting fairs, also are a thing of the past. And he'll be on pain medication for the rest of his life.

"It's impacted my life forever," he said recently from his Spokane office. "And I'm grateful for the recovery I had and the job I have, incredibly grateful, but injuries like that, they're with you the rest of your life."

That's why work zone safety awareness is so important, and why we stress it not only for our work crews but also for passing motorists. Attention is rightly given to workers killed in work zones, but there also are people like Terry, whose injuries are far more extensive than they may sound in an evening news report.

Greg King knows that all too well. Greg was struck by a semi truck on Jan. 26, 2016, while flagging traffic near Aberdeen. He's hoping to return to part-time light duty work soon, but it has taken 15 months and back surgery to make that possible.

King considers himself lucky to have survived. He knows just a few more seconds or inches could have caused a career-ending injury – or even death.

"It's been a long road of recovery," he said recently at our Worker Memorial ceremony for workers injured or killed on the job. Greg's not a fan of the spotlight, but he agreed to speak at last year's ceremony and to be interviewed by news crews this year because he knows firsthand how crucial it is to raise awareness about work zone safety.

"It's someone's life at stake," he said. 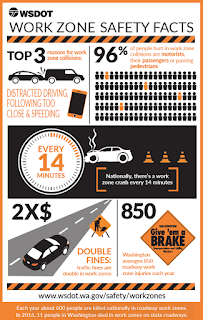 "That could be your brother, your father or another family member who's out there working," adds Terry. "Treat it that way."

Terry said he's not angry at the asphalt truck driver who backed over him and is glad to note that policy changes after his incident improved work zone safety. But workers still face dangers today, both from the very nature of their work as well as the vehicles passing just feet away.

Terry hopes sharing his story will remind both his fellow workers and drivers about work zone dangers and what they can do to help keep everyone safe. Most work zone crashes are completely preventable by just slowing down and being extra alert.

"No one drives through a work zone thinking they're going to hit someone," Terry said. "They're thinking they're now 15 minutes late for whatever and don't think it will happen to them. But everyone out there has a family, has kids, has parents that they go home to at the end of the day."
Posted by Ryan Lanier at Thursday, April 20, 2017